The STORM project is gearing up for the next heating season! The next step is integrating the low-temperature network in Heerlen into the system. 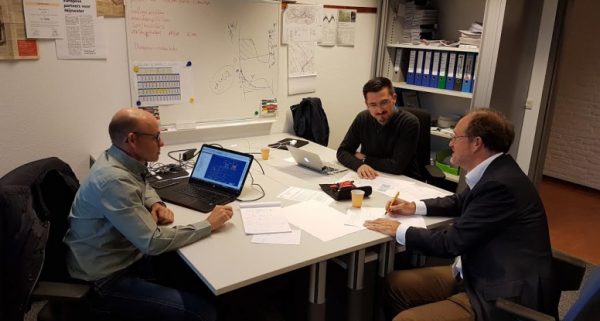 The STORM project is gearing up for the next heating season! The next step is integrating the low-temperature network in Heerlen, the Netherlands, into the system.

The Mijnwater project in Heerlen is one of the two demo sites of the STORM project. All customers of the Mijnwater system are connected to cluster networks. At the moment, the system in Heerlen consists of four individual clusters.

Scheme of Cluster A, one of four Mijnwater clusters

Each connection at the customer site has an energy installation with electricity-driven heat pumps. The system is demand-driven. This means that when a customer demands warmth, the opposite flow of useful cold water is returned to the cluster network. If possible, this cold water is delivered to neighbouring customers that need cooling, for instance a datacentre. As far as possible, the returning flow of warm water is again used within the cluster network. In this way, energy between customers is exchanged in the most optimal way. The unbalance in energy demand and opposite returning flows within the cluster is exchanged through the so-called backbone. The backbone is a piping network that connects the warm and cold wells of the Mijnwater system. The necessary warm or cold water is extracted from the immense underground storages in former mineshafts. With the returning flows of opposite temperatures energy is exchanged with the other, to the backbone connected cluster networks. Residual flows are infiltrated in the hot or cold underground reservoirs for later use. All used electricity is produced out of sustainable sources. Find out more about the demonstration site here.

As a first step, a MATLAB simulation environment was built to test the controller performance for the demo sites  Rottne (Sweden) and Heerlen (The Netherlands). The simulation environment consists of a building simulator (including radiator, thermostatic valves and substation models) and piping networks simulator. Simulations are done with a very short time step (1 second) to simulate the transient behaviour and dynamics of the system.

The prototype of the STORM controller has already been tested during the winter period 2015-2016 in the Rottne demo site. A simulation environment was also build for the case of the Mijnwater demo site. The Rottne demo site is a more complex case – even beyond 4th generation networks – because it contains heat and cold delivery and energy exchange, possible flow in pipes in two directions, heat pumps in buildings and the integration of storage systems. Hence, the piping model needed to be adapted and the building model adjusted.

Installation of the STORM controller

In the first phase of implementation of the STORM controller, cluster A will be connected and tested from heating season 2016-2017 onwards (winter and summer). The most important buildings that are connected to clusternetwork A are APG (office and datacentre), Arcus (school-complex), MAB (multifunctional accommodation) and RABO (office). All customers have their own building management system (BMS). The Mijnwater system is controlled by a PRIVA system through which system data is logged and stored. The greatest challenge is to get both systems to communicate with each other in order to read and write data. In most cases, adjustments to the BMS and needed for which external parties must be enabled through the building owners. It goes without saying that these are particularly intensive and time-consuming activities. At the moment the MAB building is yet to be connected and we expect the other buildings to follow soon.

From the last cooling season on, business-as-usual-data was gathered and stored to be used as verification for the results of the upcoming testing period of the STORM controller. In the second phase of development of the STORM controller the interaction between all clusters (e.g. the whole Mijnwater-system) will be monitored and tested.

The Heerlen site has high expectations of the results that can be achieved by predicting the future energy-need of buildings within the cluster, especially where storage is implemented.